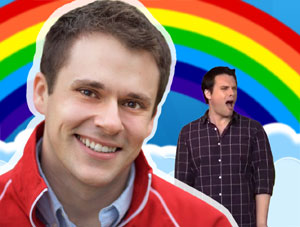 The weekly segment “That’s Gay” is a hit on iTunes and YouTube and it’s made Bryan Safi a star on the Internet.

Today we’re jumping in the gay jacuzzi with the hilarious Bryan Safi to talk about the terrible things he had to do to launch That’s Gay, all the behind the scenes dirt and the ridiculous idea of a magical gay best friend that can fix anything.