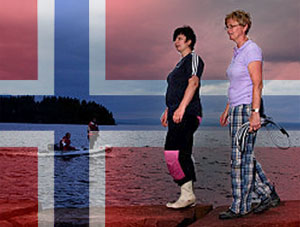 Now that several days have passed since the horrific massacre in Norway where as many as 76 people, mostly children were killed by a deranged right wing lunatic, details are surfacing about heroic acts done by people in the area.

Officials are saying that a lesbian couple may have saved as many as forty people from the mad man. Join us for this and all the hot news.