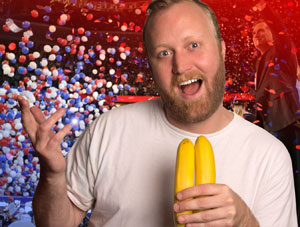 More than usual, the Republican National Convention is a hot mess- they’ve picked a candidate no one’s excited about, their platform is from another century, and in his doddering speech, Clint Eastwood came off more like Dirty Diapers than Dirty Harry.

Joining us is the reliably hilarious James Fritz , who can stuff two bananas in his mouth when nobody’s looking, no homo.