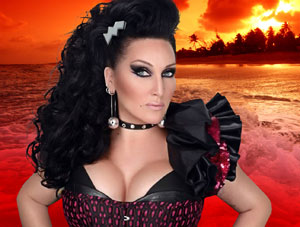 The Drag Stars at Sea Cruise sailed out in choppy waters after the cruise line issued a controversial letter requesting passengers to not dress up in drag. After a very heated public outcry, Carnival apologized saying anyone could be as fierce as they wanted on the high seas.

Today Michelle Visage from RuPaul’s Drag Race dishes the dirt from the cruise which brought together 1300 fans and most of the queens from the show.