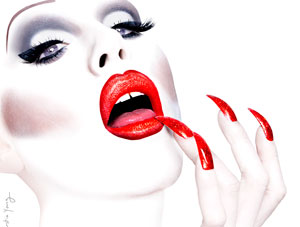 Beyond a shadow of a doubt, Sharon Needles is the biggest breakout star from the reality TV show RuPaul’s Drag Race. Now she’s killing it with her new album, PG-13, which debuted on the iTunes pop charts at #4.

Today, Sharon Needles is back on Feast of Fun to play her entire album exclusively for premium listeners and to tell us the terrifying tales behind the making of the album.