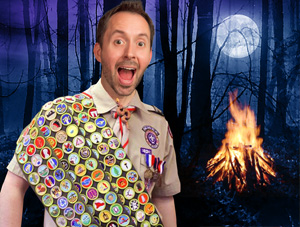 The Boy Scouts earned a badge of mediocrity over their announcement to end to their ban on gay troops, while keeping a ban on gay leaders. Meanwhile here in Chicago, the International Mr. Leather Pageant attracted lots of kinky folks sporting sashes reminiscent of the Boy Scouts.

Joining us today is former Boy Scout Chris Doucette who grew up to earn a merit badge in hilariousnes.