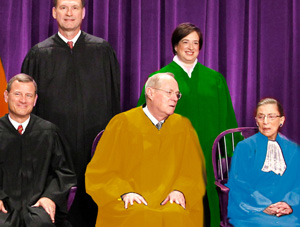 Good news everyone! Just in time for Pride, the Supreme Court struck down the Defense of Marriage Act and told the backers of Prop 8 “you have no power here. Be gone!”

The Supreme Court decided that DOMA had to go because it put same-sex couples in the unstable position of being in a demeaning, second-tier marriage and humiliates tens of thousands of children being raised by same sex couples.

The Prop 8 ruling took a more hands off approach, leaving in place a trial court’s declaration that California’s voters ban was unconstitutional.