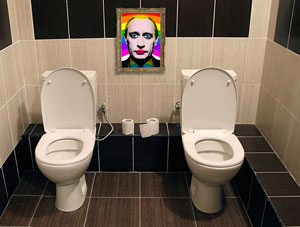 Russian officials are on the defensive after journalists have been posting hilarious and disgusting photos of their nightmarish hotel rooms in Sochi, saying the whole thing is overblown.

Today we take a look at the hilarious and disgusting Olympic sized mess unfolding in Sochi, and wonder if Russia’s President Vladimir Putin is watching journalists taking a shit?