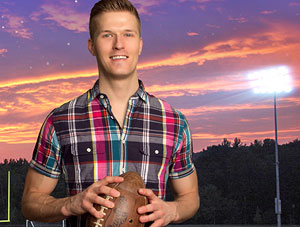 In the wake of pro football star Michael Sam coming out, Eric Lueshen, a former kicker for the Nebraska Cornhuskers was encouraged by others to come forward and share his own coming out story.

Even though Eric was openly gay to his friends, family and team-mates in high school, in 2002 he was recruited by the University of Nebraska-Lincoln to play as their place kicker.

Listen as Eric Lueshen chats with us about the challenges of being out in sports and he shares his heartfelt message of hope, love and acceptance.