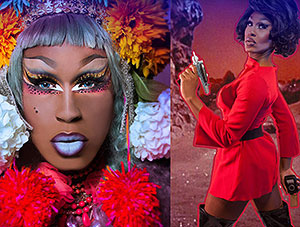 Halloween is just two week away folks, and you probably haven’t even thought about what you going to wear. Unless you’re gay, which you probably are, and you decided sometime in right after Pride.

Today we are joined by drag queen Shea Coulee, who has worked retail in both costume and sex toy shops. Being half bougie and bangie, she’s got a good sense of how to make the most of your drag dollars and look fierce this Halloween.