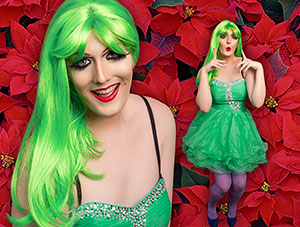 After winning this year’s Reddit’s Lip Sync for Your Life Contest,” Joan Waters won yet another contest, Northwestern University’s production grant for having her own script turned into a television pilot. The show is tentatively is called “Out of Sync,” a Cheers like sitcom that takes place in a bar full of drag queens.

Today the she-larious Joan Waters joins us to take a look at the hi-jinks of putting together a sitcom with real drag queens. Why all the RuPaul’s Drag Race “Meet the Queen” videos had such low energy and what’s the skinny behind the Drag Stars at Sea cruise.