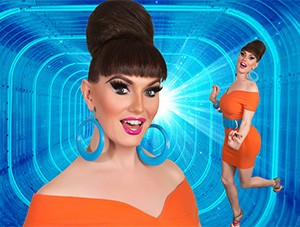 As a teenager, Sara Andrews was inspired by the film Too Wong Foo to become a drag queen. Later on, she came to realize she was also trans. And just like her mentor Calpernia Addams, she stuck with drag.

Today, the lovely Sara Andrews joins us to talk about being a trans woman in love with a trans guy, dressing up as Sarah Palin and her recipe for fried baloney sandiwches.