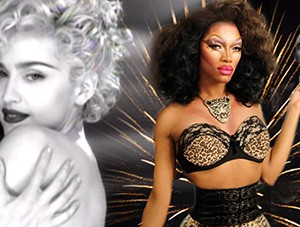 After 25 years, footage from Madonna’s Vogue video is online where Madge painstakingly perfects her moves while cursing her ass off. But what exactly is Madonna saying in the silent footage?

Joining us today is The Vixen, one of Chicago’s rising queens on the scene, whose dance style can be best described as making love to the stage.