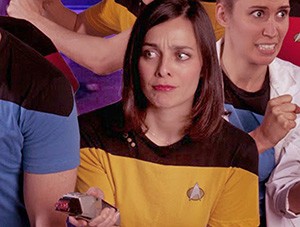 One of our favorite Chicago comedy gems is Improvised Star Trek, the new hilarious adventures of the starship Sisyphus, that lampoons not just the popular sci-fi series, but our modern day frustrations with technology and smart phones.

Today we’re joined by the she-larious Irene Marquette, who stars as Lt. Cola on Improvised Star Trek at iO theater and hosts her own comedy showcase The Curio Show.