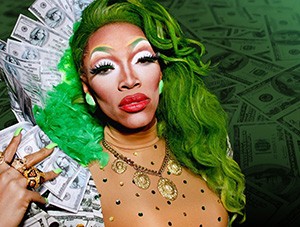 The Vixen done with trying to grab all her tips while she’s death dropping on stage. So— she’s releasing a new single “Money on the Floor” to encourage the children to leave the munty on the floor so she can nab it at the end of her act.

Today, The Vixen joins us to conDRAGulate Cooking with Drag Queens’ very own Kim Chi and Bob the Drag Queen (coming soon) on winning Season 8 of RuPaul’s Drag Race!