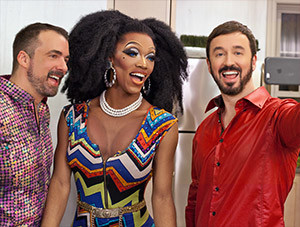 The Vixen has had quite the week- she was featured in a major newspaper article on just how real the struggle is, which prompted an online fight with Gia Gunn from RuPaul’s Drag Race, but best of all, her episode of Cooking with Drag Queens premiered!

Today, the Vixen joins us to talk about what didn’t make it on her episode of Cooking with Drag Queens and why she kept pointing out that’s not how her mother would make gumbo.