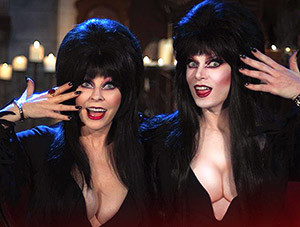 Today we’re chatting with Elvira’s only official drag queen impersonator, Christian Greenia, who also runs much of the behind the scenes business of the Queen of Halloween.

Listen as we chat with Christian about performers whose characters took over their lives and forever blurred the lines between reality and fantasy. Like pro wrestlers and rock stars, Elvira, Pee Wee Herman and Andy Kaufman made a career by blurring the lines.