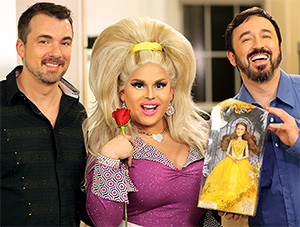 Spoiler alert! It broke our hearts to see blond bombshell Jaymes Mansfield be the first contestant to go home on RuPaul’s Drag Race Season 9. But things aren’t over yet for this gal from Wisconsin- she’s still putting out great work in her LGBT pop culture web series Drag Herstory and she makes her Cooking with Drag Queens debut where we make a Beauty and the Beast Princess Doll Cake.

Today, Jaymes Mansfield joins us to share her experience on RuPaul’s Drag Race and meeting so many of her idols including Lady Gaga.