It always stinks of a publicity stunt whenever Gwyneth Paltrow releases one of her bougie new products and her recent “This Smells Like My Vagina” candle smells exactly the same.

Gwyneth claims she was high on mushrooms when she came up with the idea of the candle, described as a blend of geranium, bergamot, cedar and other stuff that “puts us in mind of fantasy, seduction, and a sophisticated warmth.”

The candles sold out, thanks to Elton John who probably snatched a bunch to burn during future performances of his iconic song “Candle in the Wind.”

Today comedian Matt Brown joins us to figure out if Gwyneth Paltrow’s scented candles could be considered a fossil fuel.

➤ The Boys in the Band, the pioneering play and film about gay men sassing each other up at a birthday party celebrates it’s 50th anniversary by coming to Netflix and the Windy City Playhouse in Chicago. 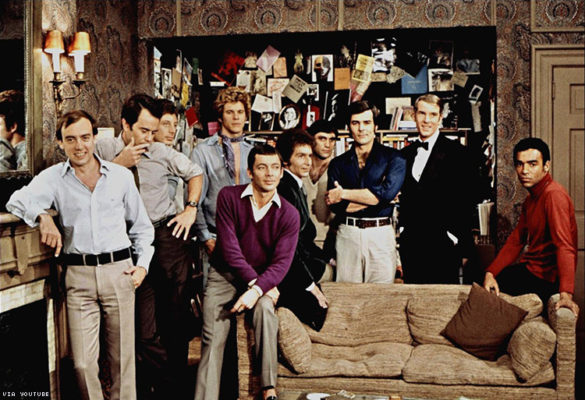 The velvet rage in the 1970 film The Boys in the Band seems all too current. Photo: National General Pictures

➤ Busting cheeks and busting beds at the Olympics.

➤ The Pope asks a nun not to bite him.

This entry was posted on Monday, January 27th, 2020 at 12:22 am and is filed under Comedians, Podcast. You can follow any responses to this entry through the RSS 2.0 feed. You can skip to the end and leave a response. Pinging is currently not allowed.