It’s been 25 years since the Showgirls hit movie theaters to a confused and terrified public. Promoted as “All About Eve in a G-String” the movie is a demented rollercoaster ride through the eyes of an ambitious dancer Nomi Malone who screams, slams and screws her way to the top of a Las Vegas showgirl revue- Goddess.

Like Paul Verhoven’s previous film Basic Instinct, Showgirls was supposed to be a star vehicle for Elizabeth Berkley, instead the Saved by the Bell actress spent the rest of her career wrestling with the trauma of being labeled the worst actress in the worst film in Hollywood history. 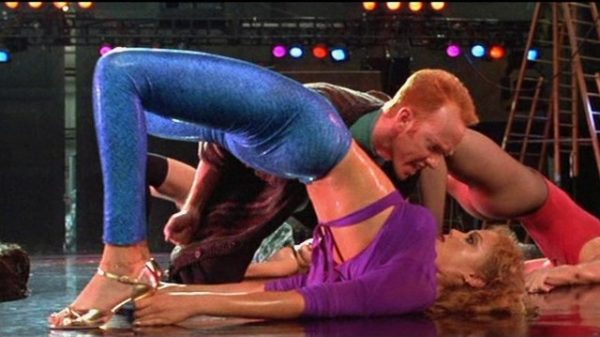 Today documentary filmmaker Jeffrey McHale joins us to take a look at why people still can’t stop talking about Showgirls all these years later. Jeffrey’s feature film debut, You Don’t Nomi, explores the themes of sexual violence, camp and outrageousness in Paul Verhovens films and interviews a wide variety of fans of this cult classic including our dear friend Peaches Christ.

Listen as we take a look at how Showgirls inspired early drag characters on social media like Human Resources Irene, Nomi Malone and Cristal Connors and how it was the bedrock of many of the great moments in Feast of Fun’s own history, darlin’.

This entry was posted on Wednesday, July 1st, 2020 at 12:42 am and is filed under Filmmakers, Podcast. You can follow any responses to this entry through the RSS 2.0 feed. You can skip to the end and leave a response. Pinging is currently not allowed.