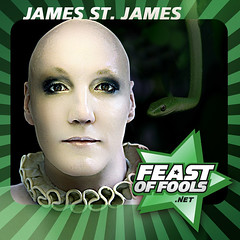 Youth gay culture is exploding online and in high schools everywhere. Just take a look at our community forums here at Feast of Fools. Youth gay culture, GLBT teens, or whatever words you want to use to use to describe it: teenagers all over the United States are speaking up, talking about their sexual identity with the support of their parents and schools.

You’ve come a long way, gay baby! Just PLEASE wait until you’re old enough to understand the ramifications of your actions before you do “it,” and when you do, please PLEASE use a condom.

Gay culture folks like us or writer James St. James are thrilled to welcome these fresh faces into the fold and share our stories, experiences and ideas. Today we’re delighted to bring legendary NYC nightclub performer (or club-kid) James St. James on the show to talk about his new book “Freak Show,” a semi-fictional story about the struggles and triumphs of a fabulous gay teenager living in a conservative Southern town in Florida. I say semi-fictional because in many ways the story is loosely based on his own life experiences growing up gay.

“Freak Show” attempts to create a healthier atmosphere as he tells the story of Billy Bloom and his struggles to fit in at his High School and how he tries to get the class hunk. It may sound like a departure from his better known autobiographical novel “Disco Bloodbath” (later re-named “Party Monster”) where he tells the dark and grim story on how NYC nightclub promoter/club-kid Michael Alig killed his drug dealer Angel Melendez.

We’re making a special announcement today. The word “reinventing” needs to be dis-invented. We’re tired of seeing everyone everywhere “re-invent themselves” when they are really just putting on a new wig and going shopping at H&M. Save the word for when it means something, like “they just re-invented the combustion engine to run on hugs and kisses.”

Join Marc Felion and me, Fausto Fernós as we talk to James St. James about his book and his celebrity gossip. Did he really sleep with Macauly Culkin? Listen to today’s show and find out.

The podcast you want to take to the prom: Feast of Fools.

This entry was posted on Monday, August 17th, 2020 at 12:51 am and is filed under Interviews, Podcast, Writers. You can follow any responses to this entry through the RSS 2.0 feed. You can leave a response, or trackback from your own site.