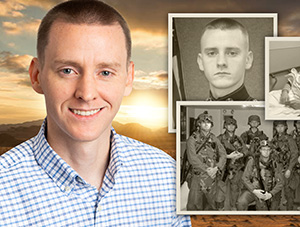 At the young age of 17, James Curry hoped to escape a hostile home by enlisting in the Marines, and ended up right in the middle of the terrible War in Iraq.

James survived his tour of duty by hiding being gay under the Don’t Ask Don’t Tell policy, but then after returning to civilian life, lost his first boyfriend and ended up homeless.