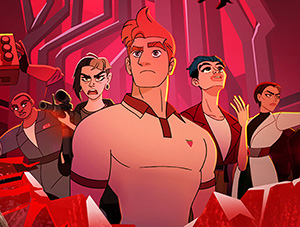 As LGBTQ people, we’re connected now more than ever before. We live together, we fight together and we ride together- that’s what inspired comedy writer Gabe Liedman to create Q-Force, Netflix’s new animated comedy series that takes us on an adventure with a team of queer super spies and their allies as they team up to fight evil, save the world in West Hollywood, all before Brunch.

Today Q-Force’s animators and directors Jeanette Moreno King and Alex Sayler join us to talk about the new animated series, their shared history animating The Simpsons and the new Beavis and Butthead film.