Winning an Oscar Will Make You Slap Someone The 94th Academy Awards were a pretty, oh so pretty event for West Side Story’s star Arianna DeBose.

Six decades after Rita Moreno won an Oscar for her portrayal of Anita in the first big-screen adaptation of the beloved musical, DeBose followed in her 90-year-old costar’s footsteps to win for playing Anita in Steven Spielberg’s 2021 version of West Side Story.

Then things got really wild when Will Smith slapped Chris Rock onstage after the comedian delivered a joke about his wife Jada Pinkett-Smith. 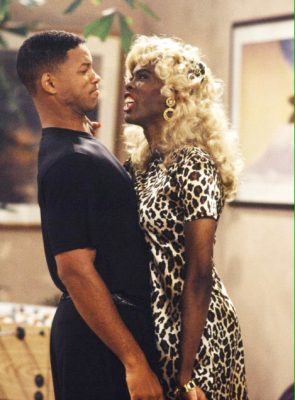 They go way back: Chris Rock in drag with Will Smith on the TV show Fresh Prince of Bel Air.

Today we’re talking about the highs, the lows and the blows of this year’s Oscars ceremonies with comedian Matt Brown, who claims Jessica Chastain has his Oscar because the role of Tammy Faye will always be his.

➤ The Power of the Doggy Style.

This entry was posted on Monday, March 28th, 2022 at 11:48 pm and is filed under Comedians, Podcast. You can follow any responses to this entry through the RSS 2.0 feed. You can skip to the end and leave a response. Pinging is currently not allowed.