The Year of the Rabbit and Ta Yeh, the Gay Rabbit God 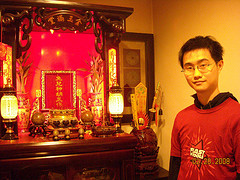 With the “Year of the Rabbit” upon us, here’s a first person account of a listener in Taiwan who went to the temple of the “Gay Rabbit God.” Ta Yeh, supposedly lived as a man in the 18th century and was killed for cruising a ruling official in the bathroom. The greater gods took pity on him and made him the rabbit god, which is considered by the Chinese to be a naturally gay animal.