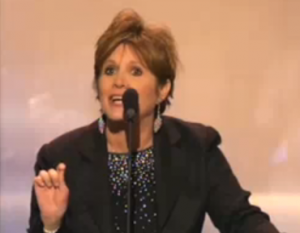 We’re huge fans of Carrie Fisher. At the AFI Life Achievement Award: A Tribute To George Lucas the actress who’se life was forever changed when she was cast as Princess Lei in the Star Wars films returns onstage over 30 years later to give the film’s director a piece of her mind.