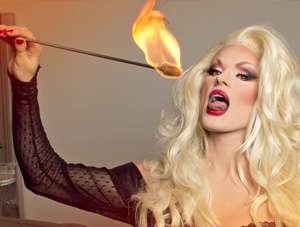 Because of safety concerns, nobody got to see Ivy Winters eat fire on RuPaul’s Drag Race Season 5. Check out our video with Ivy as we share tips on being a fierce fire eating drag queen.

Back in the late 90s and early 2000s, I was known as the “fire eating drag princess,” so it was really great to pass the torch (literally to such a warm, kind drag queen like Ivy Winters.