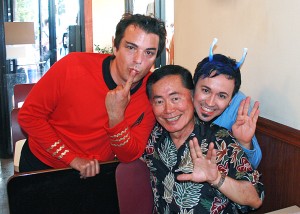 We’d absolutely would LOVE to hear from you. Getting an email with your photo and a glowing endorsement is like having a quarter put in the tip jar! Better yet, please take a moment and help support our production costs by donating here.

Please share with us your news, gossip, photos, stories, show ideas, cocktail recipes, and comments to:

FEAST OF FUN IS MADE POSSIBLE BECAUSE
OF FABULOUS PEOPLE LIKE YOU.
LISTEN TO THOUSANDS LEGENDARY SHOWS  with NO ADS:
★ https://feastoffun.com/plus

Frequently Asked Questions. | Past articles written about the Feast of Fun.

What is the Feast of Fun?

The Feast of Fun podcast is a daily talk show hosted by Fausto Fernós and Marc Felion featuring celebrity guests and friends of the LGBT community. The program is also a roundtable discussion of news, trends of interest.

With over 12 million downloads to this date, the Feast of Fun has the distinction of having one of the largest audiences for a comedy talk show produced from Chicago, and the largest audience for a LGBT-themed podcast in the world. It’s one of the most popular daily audio programs of its kind for any audience. 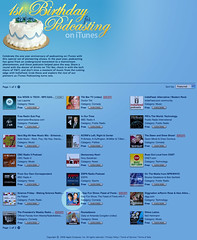 When the iTunes Music store celebrated it’s one year anniversary of podcasting, Feast of Fun was chosen as one out of 48 “pioneering shows… helping to bring podcasting from an underground movement to a mainstream phenomenon, [Feast of Fun] helped to pave the way.” -iTunes Music Store, June 28, 2006.

In the November 2005 issue of OUT Magazine featured an article about the Feast of Fun saying: “Pretty Impressive… a combination of outrageousness and intimacy that’s won listeners over.” -Troy Dreier, OUT Magazine.

Join in the fun and listen to the Feast of Fun podcast anytime for FREE at: www.feastoffun.com

* Rankings according to the iTunes Music store popularity listings from October 2005 to August 2008.

As a performer and artist Fausto Fernós has achieved acclaim in a variety of mediums. He started performing at age 18 in Austin, Texas, where he self-produced a weekly live soap opera called “SoftMen.” He went on to produce and host other variety shows in Austin, Texas and Chicago, including the “The Minimum Wage Art Series,” “The Big Wig Revue,” and “Pe.A.Ch. –The Performance Art Church.” Fernós is best known in Texas for his unusual cable access talk show “Faustina!” which won several awards, including the Austin Chronicle’s “Best of Austin: Best Cable Access Show” in 1995.

Fernós wrote and directed three musicals dealing with such diverse subject matter as gay biology “Homosexual Personæ,” the first complete dinosaur fossil ever discovered “Mary Anning,” and the search for intelligent life beyond Earth “Voices From The Sky.” Fausto perform regularly with his band, which was featured at the queer rock concert IDA-palooza along with Bitch and Animal & Pistol Pete and Pop-Gun Paul in the mountains of Woodbury, Tennessee. In June of 2001, Fausto Fernós was awarded by Windy City Media Group’s “30-under-30-award,” given every year to 30 GLBT visionary people under the age of 30 who make Chicago one of the most interesting cities in the world.

In June of 2003, Fausto’s solo work was featured in the exhibition “Confessions of the Avant-Garde” a retrospective of the Cleveland Performance Art Festival history and legacy. Fausto Fernós was selected out of literally thousands of images, artists, and media as one of the 20 featured artists included in that exhibition. Others artists included were: Blue Man Group, Karen Finley, Guillermo Gomez-Peña, Goat Island, and Holly Hughes. Currently, Fausto produces and hosts Feast of Fun, the worlds most downloaded podcast for a gay and lesbian audience.

Marc joined the Feast of Fun family in 1999 when Fausto and he started dating and Marc commandeered the kitchen where he worked so that they could make cookies to sell at a bake sale to raise money for the Feast of Fools live Show. He thinks we made about $60.

Marc was always behind the scenes at the Feast of Fools Live Show. He helped write scripts and make costumes for the live shows. He was ever present at the the actual event, working the crowd, greeting guests, running the video camera and working the spotlight.

Marc became involved in The Feast of Fun Podcast because he had to! It was taking place in his living room night after night. He had to join in on the fun or go hide in the back bedroom. Marc’s glad that Feast of Fun helps bring a positive message of what life is like in an alternative urban environment
Marc Felion Photo Gallery | Profile

Feast of Fun Podcast, Feast of Fools/Fun, the Star Logo, all our promotional phrases posted on the site, and Feast of Fun name are owned by the Feast of Fun, Inc. © 1998-2020.