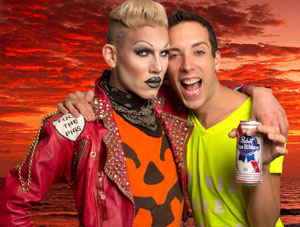 Sharon Needles won last year’s RuPaul’s Drag Race and is the most celebrated drag queen from that show. His lover, Alaska Thunderfuck has tried out for the show at least four times and never made it on.

This is their first interview together! Listen as Sharon Needles and his lover Alaska Thunderfuck talk about their relationship, their spooky Haus of Haunt and who wears the stilettos around the house.