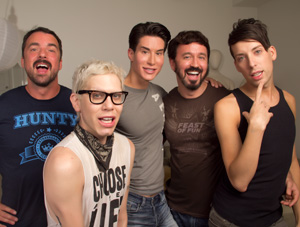 Sharon Needles and Alaska Thunderfuck are now touring the country like rock stars in “Battle of the Seasons” which pits the show’s popular girls against each other to see who will be the Ultimate Drag Superstar.

Today these fabulous girls join us to talk about their humble origins in Pittsburgh- climbing out of the pile of broken dreams and drag queen remains to become one of the world’s most talked about performing couples.