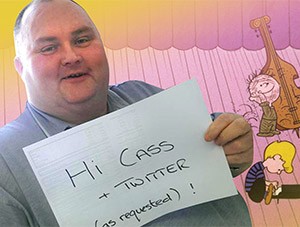 A thick and juicy guy dancing at a concert has become an internet sensation after Internet trolls posted photos of him first dancing happily to the music and then later hanging his head in shame when he noticed some mean folks laughing at him.

Usually the story ends here, but folks on the Internet have led the charge to turn the Dancing Man’s frown upside down by raising over $35,000 dollars to throw him a big party.