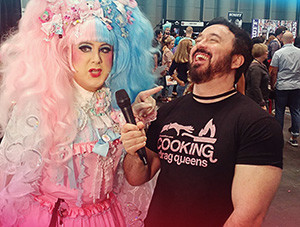 RuPaul likes to say that society’s interest in drag is like a window that opens and closes, but by the looks of the latest RuPaul’s DragCon in New York City, the roof is now blown off that muther and the walls are a’ tumbling down. Drag, a gig which was once a small barroom performance is now a multi-million dollar industry.

Today we take you inside RuPaul’s DragCon New York City 2017- all the tea from children drag queens to hunky models and best of all, meeting you, the listeners.