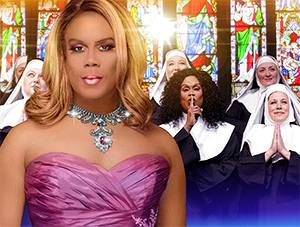 Sister Act, the 1992 musical comedy starring Whoopi Goldberg, is a favorite classic for many LGBTQ+ folks, after-all, who can’t relate to a larger than life figure who has to find their own special world to protect themselves from dangerous forces?

Today Alexandra Gray, drag entertainer from the Hall Dynasty, joins us to take a look working in Chicago’s drag scene and then getting cast in the Sister Act Musical, in the lead role of Delores Van Cartier.

Listen as we chat with Alexandra about how drag gave her a path to expressing her womanhood and the similarities of her life to the movie Sister Act.