When we discovered comedian Maggie Faris’ outrageous show “Dyke It Yourself” web series that parodies craft and home renovation shows we practically rented a U-Haul and moved in.

Crafting is big for the holidays so we figured it would be great to chat again with Maggie about her life as a Snow Plow Queen, her outrageous Halloween costume and weird but wonderful crafting ideas.

Today Maggie Faris shares with us stories from her new comedy album “Tougher Than a Honey Bee” now available for pre-order, where she proposes marriage to her girlfriend at a giant rainbow slide at the Minnesota State Fair. 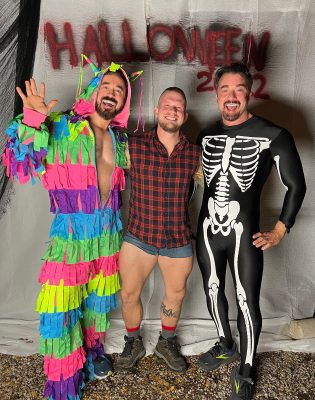 ➤ A woman unleashes a swarm of bees on the police trying to evict her from her home.

Tougher Than a Honey Bee by Maggie Faris

Listen to Tougher Than a Honey Bee by Maggie Faris on Apple Music. Stream songs including “The Very Funny Maggie Faris, Everyone”, “My Pronouns” and more.

This entry was posted on Tuesday, November 8th, 2022 at 1:25 am and is filed under Comedians, Podcast. You can follow any responses to this entry through the RSS 2.0 feed. You can skip to the end and leave a response. Pinging is currently not allowed.