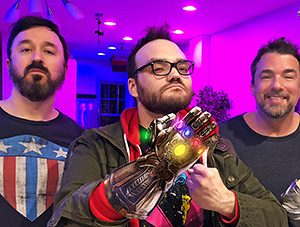 The end is nigh! One of pop culture’s biggest phenomenons- the Marvel comic book film franchise is wrapping up all its movies in the new film, Endgame, coming next week.

Today amateur cultural anthropologist and comedian Brian Sweeney joins us to look at the incredible Marvel Film franchise concluding all the varied narratives in the upcoming film Endgame and #FreeBritney- why can’t Britney Spears be left alone?