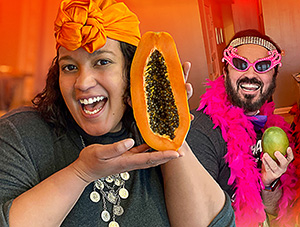 Iko iko! It’s Mardi-Gras so catch some beads, gobble up some King Cake and get a load of Mango – Mango Braggadochio who describes herself as a party exploding in the produce aisle of a bodega that’s next to a sex shop.

Mango is the creation of comedian Mari DeOleo, who was born in the Dominican Republic, raised in rural Pennsylvania where she partied with Amish kids, until got into Christian clowning which lead her to the wild side. Today Mari DeOleo joins us to talk about her life as an artist and some unusual Mardi Gras celebrations throughout the world.