Can’t you hear me, calling to you? Erthe St. James joins us to reflect on Nina Simone, Stevie Wonder and more in the Hulu documentary Summer of Soul. Illustration: Fausto Fernós.

The summer of 1969 was an extraordinary time- the Stonewall riots ignited the modern LGBTQ rights movement, astronauts landed on the moon, Woodstock shaped the anti-war movement and for Black folks in Harlem, it was the Summer of Soul.

The Harlem Cultural Festival was a five week musical event featuring the top Black musicians of the time and was sponsored by the City of New York to quell social unrest surrounding the anniversary of the assasination of the Rev. Martin Luther King Jr..

Although the Harlem Cultural Festival was jam packed: Stevie Wonder, Mahalia Jackson, Nina Simone, The 5th Dimension, The Staple Singers, Gladys Knight & the Pips, Blinky Williams, Sly and the Family Stone and the Chambers Brothers, (and so many other legends) it was mostly forgotten until footage of the event was discovered and released in the the new documentary directed by Questlove, Summer of Soul (…Or, When the Revolution Could Not Be Televised).

Today musician Erthe St. James, who is highly influenced by Nina Simone and the music of this era joins us to look at the impact these artists from Summer of Soul have had on music and Civil Rights.

Listen as we chat with Erthe St. James about the wonderful music featured in the documentary and what the world would be like if the footage of the festival was widely seen at the time? 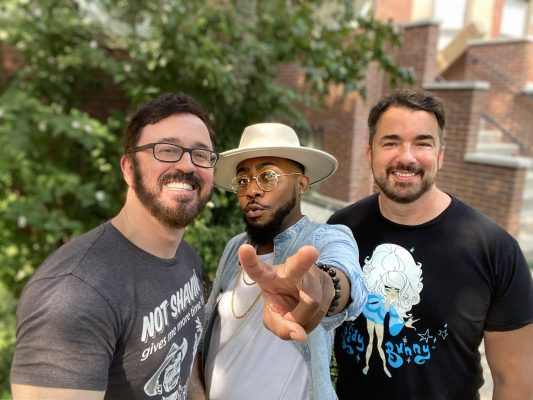 If you do it right, every summer can be the Summer of Soul. Fausto Fernós, Erthe St. James and Marc Felion. Photo: Fausto Fernós.

This entry was posted on Tuesday, September 21st, 2021 at 12:51 am and is filed under Culture & Style, Music, Musicians, Podcast. You can follow any responses to this entry through the RSS 2.0 feed. You can skip to the end and leave a response. Pinging is currently not allowed.