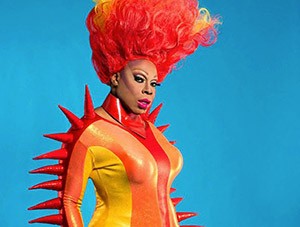 Mother has arrived- again! We simply adore Vivacious, the fierce New York City drag queen whose entrance wearing a second head made of a foam wig stand left an indelible mark on the viewers of RuPaul’s Drag Race.

Today Vivacious zhooshes her pussy, steps it up, turns it out and works it out, serving up all tea, all tea. Listen as she weighs in on the season 7 girls of RuPaul’s Drag Race,