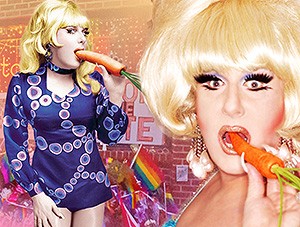 While Lady Bunny was performing her hit show “Transjester” at the Stonewall Inn, President Obama declared the building and the area of the Stonewall Uprising as a National Monument.

Today, Lady Bunny gives us a look at her early days as a drag queen in Atlanta with Rupaul and how she was forced by her band, Now Explosion, to dress up in drag on their car ride move to New York City.