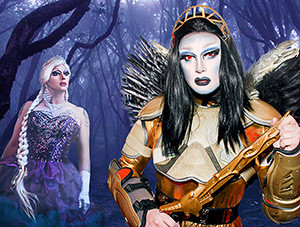 The last time we had cosplay drag queen Fox E. Kim on the podcast we had such a fun time talking about drugs, we had to have her back on to talk more on the subject – from flakka to crocodile to carfentanil. What are they, why would you take them and how can they kill you?

The Oscars nominations are in and while they aren’t as white as last year, they are still pretty white overall, but at least one gay themed movie made it into the best picture category.