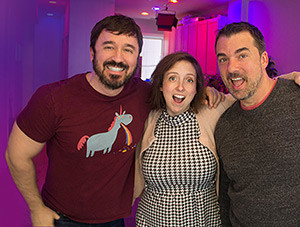 Folks say the difference between a straight man and a gay man is a six pack – of beer. Until recently that’s been the premise of your favorite gay adult film but now it’s a real thing because science.

Today, comedian Carma Nibarger, who spends a lot of time in bars watching folks get all lovey dovey after kicking back a few shots, joins us to weigh in on booze, boys and bromosexuality.