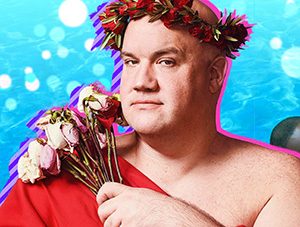 At a young age, out gay comedian Guy Branum realized that channeling his inner goddess was a great way to assert power in a world dominated by straight men. As a gay boy you might not have the ability to wield lightning bolts but you sure can turn a bitch into stone with a cold stare and a sassy quip delivered with impeccable timing.

Today, Guy Branum joins us to talk about his hilarious and touching new memoir “My Life as a Goddess.”