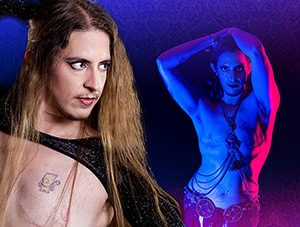 Initially drawn to belly dancing as a form of exercise, Kamrah soon discovered that it was a great way to express femininity which was something Kamrah always struggled with. But after a decade of gyrating those hips, Kamrah came out as trans male which put into question his identity as a belly dancer.

Today the fierce and fabulous Kamrah, Chicago’s first trans masculine belly dancer, joins us to talk about their journey in belly dancing