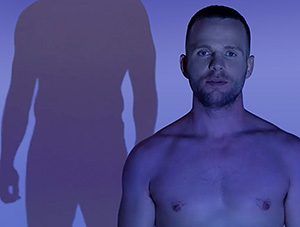 Today musician Tom Goss, who for years has pioneered new film and music techniques in his music videos joins us to take a look at his new work Wake Alive which presents the idea that we literally put ourselves in little boxes and that we are often trapped by the limited perceptions others have of us.

Listen as Tom Goss talks about the mainstreaming of queer musicians, singing on Facebook Live on Friday mornings with Deven and Ned and the worst gig of his life.