As star of Singing In the Rain, one of the most loved Holllywood musicals of all time, Debbie Reynolds made a name for herself with her sparkling voice and uninhibited sense of humor. Dick Cavett called her “one of the first ladies of Hollywood.”

With over 30 films, two Broadway shows and several TV series under her belt, Debbie Reynolds still continues to captivate audiences with her one woman show.

Today we’re talking to Hollywood’s Golden Age diva — Debbie Reynolds on her conservative roots, her divorce from Eddie Fisher and being the mother of the Princess of Sci Fi- Carrie Fisher.

What was it like to rehearse the dance sequences with Gene Kelly? Is it true he made her feet bleed? What’s it like living next door to her daughter? 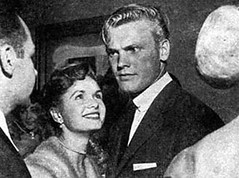 Listen as Debbie shares with us her stories of dating closeted gay men in Hollywood, being a mother to all her fans and she dishes on drag queens making it big in show business.

In the photo on the right is Debbie Reynolds with Hollywood hunk Tab Hunter, who later came out as a gay man in the late 80s. What was it like dating him?

This entry was posted on Wednesday, March 17th, 2021 at 12:19 am and is filed under Actors, Classic Podcasts, Interviews, Podcast. You can follow any responses to this entry through the RSS 2.0 feed. You can skip to the end and leave a response. Pinging is currently not allowed.