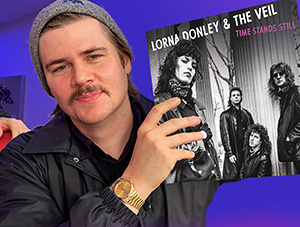 Our story today begins with our neighbor and dear friend, Eric Clements, who discovered a giant box of cassette tapes at a thrift store.

Among the massive collection of pop music was a few cassettes of a band he never heard of called the Veil, whose rock music and strong lead vocals by Lorna Donley could easily have been played in rotation on MTV or featured in a soundtrack of a John Huges film.