Like St. Patrick’s Day or Mardi Gras, Pride month used to mean drunk, rowdy folks celebrating out in the streets, and now, for some, it means dragging your screaming kids to the local library to see drag queens struggling to read a children’s book.

Fascists are now more critical of drag queens than Aubrey O’Day reading Alyssa Edwards for her perfume ad in Season 5 of Drag Race (look it up). But is all this commotion just a distraction from the January 6 hearings on the Republicans’ sloppy attempt at a political coup to end democracy? 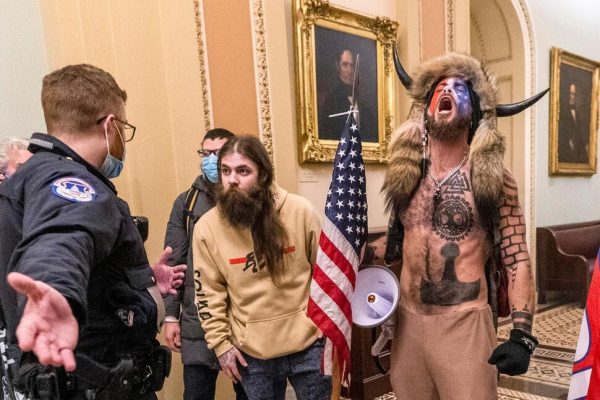 And sashay away he did. Jacob Chansley, the self-described “QAnon Shaman” who infamously marched through the U.S. Capitol with a spear and horned helmet during the Jan. 6 riot, sentenced to 41 months in prison. ⁠Photo courtesy of Instagram.

Today comedian Dan Cass, who sees the January 6th hearings as some of the best theater, joins us to make sense of the storm cloud of madness brewing.

➤ A two year old baby boy in England shows signs of puberty after exposure to his dad’s testosterone gel.

➤ Maybelle Blair, the women’s baseball pioneer who helped inspire the film ‘A League Of Their Own,’ comes out at the young age of 95.

This entry was posted on Monday, June 20th, 2022 at 5:08 pm and is filed under Comedians, Culture & Style, Podcast. You can follow any responses to this entry through the RSS 2.0 feed. You can skip to the end and leave a response. Pinging is currently not allowed.