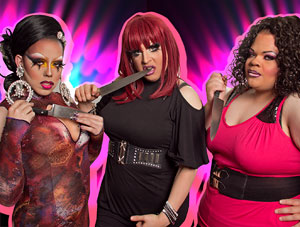 Today is part two of our special with the fabulous queens from RuPaul’s Drag Race. Can I get an Amen around here?

One of the most controversial moments on the 3rd season of the reality TV show was the factions created by the self-proclaimed “pretty” queens who called themselves “Heathers” and called the other contestants “Booger Queens.” Up till now, RuPaul could pick any booger as winner!