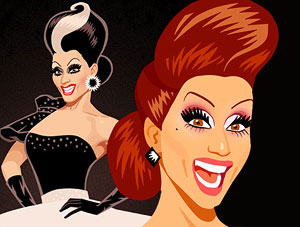 Since we tape our podcast in advance, we don’t really know who ultimately won RuPaul’s Drag Race, Season Six, and become America’s Next Drag Superstar.

Who are you kidding, of course we all know Bianca Del Rio won or did she? Did Adore Delano win it? Joining us today is Chad Sell, illustrator to the drag queen stars, and Tim Jones-Yelvington, who’s well known for his drag race recap videos.