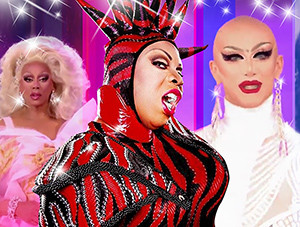 Season 9 of RuPaul’s Drag Race premiered with a guest appearance by Lady Gaga so we should have guessed early on that the queen who drew a lot of inspiration from mother monster was destined to prance away with the title of America’s Next Drag Superstar.

Today, Vivacious, the queen who rests beneath the goddess head Ornacia, joins us to kiki about the finale of RuPaul’s Drag Race.